GeMTC GUI is a graphical user interface for network meta-analysis (also known as MTC, Mixed Treatment Comparisons). Network meta-analysis consistency models, inconsistency models and node-splitting models are generated automatically by the software and can be run directly in the graphical user interface or exported to be run in JAGS, OpenBUGS or WinBUGS. The GeMTC R package can be used instead of or in conjunction with the GUI.

GeMTC is written and maintained by Gert van Valkenhoef and Joël Kuiper. See drugis/mtc on GitHub for source.

GeMTC GUI was part of the ADDIS 1.x project, and is no longer being developed. It has been replaced by the GeMTC R package.

If you use GeMTC in your work and you would to cite us, please cite the following reference: (van Valkenhoef et al., 2012)

For a good overview of Bayesian methods for network meta-analysis, see the technical support document series on evidence synthesis by the NICE decision support unit. The models generated by GeMTC are based on these documents.

How to use GeMTC GUI

To run the GeMTC GUI, download the ZIP archive and unpack it. Then just double-click the 'gemtc-gui-0.14.3.jar' file. The ZIP archive also includes a number of example datafiles that you can now open using the 'Open' button on the toolbar. If the program does not start, you likely do not have a recent version of the Java runtime environment. Get it from java.com.

The GeMTC GUI enables the easy management of datasets in the GeMTC format (.gemtc, based on XML). In the current version, it is assumed that arm-based data are available; it is not yet possible to use contrast-based data with GeMTC. 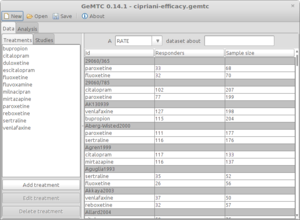 Once the dataset has been created, different models can be generated: consistency, node-splitting, or inconsistency models. The models can be run within GeMTC GUI, or exported for running in either BUGS or JAGS. Go to the 'Analysis' tab to specify the model parameters: the number of chains, dispersion of the initial values, length of the tuning (adaptive) phase and the simulation phase can be configured. 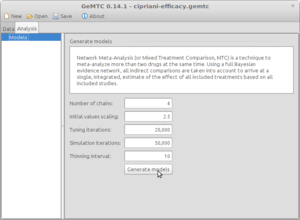 After the details have been entered, the appropriate models will be generated automatically. The models can then be run by browsing the tree on the left-hand side of the screen and clicking the `run' button. 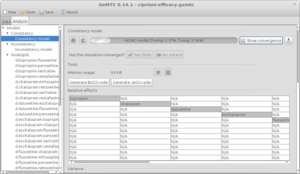 Alternatively, you can then use your MCMC software of choice to estimate the model. Click the `Generate JAGS code' or `Generate BUGS code' to obtain the code. For users of the WinBUGS or OpenBUGS GUI applications, the contents of the model, data, and initial values text can be copy/pasted into WinBUGS/OpenBUGS. Those who use the OpenBUGS or JAGS command line programs should use the 'Save' button and choose a directory in which to save the generated files. They can use the '.script' file to run the model as specified.

Prior to version 0.10, GeMTC was known as "the drugis.org MTC library" and primarily aimed at integration in ADDIS. The stand-alone version only had a Command Line Interface (CLI). From version 0.10, a Graphical User Interface (GUI) was developed as well. Starting from version 0.14, the CLI was discontinued and replaced by the GeMTC R package.